Thailand has been accepted as a land of smile and fascinating country with a population 64 million. Mushroom growing in Thailand could trace its origins to a time immemorial. For instance people from the Northern grew Bean Mushroom(Coprinus comatus) by using bean stalk and leaves(Soya bean, ground nut, black bean etc.) to pile up for 60-80 cm. then covering with dried palm leaves to avoid direct sun and moisture evaporation. After daily watering with rinsed water from soaking rice for 10-15 days without using man-made spawn, Bean mushroom would start appearing, harvesting must be done in every early noon before turning into shaggy and ink cap. Yield could be obtained continuously for over a month. Likewise, people in the Central, mostly those Chinese who permanently migrated from China, using straw and lotus seed coat, piled it up alternately in layer with 60-80 cm. high, 80-100 cm. wide and 5-6 m. long, then covering with dried leaves, applying mixed water(water with rinsed water from soaked rice or human urine), 3-4 weeks later, mushroom would start coming and harvesting could be done for months. Formally, this mushroom was called Lotus mushroom subsequently called Straw mushroom(Volvariella volvacea) due to mostly using rice straw as main substrate. 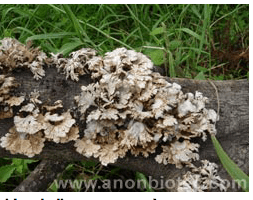 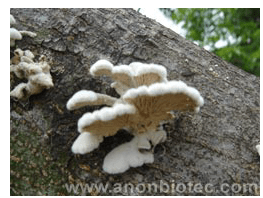 For those who live in the Southern, growing Fan mushroom (Schizophyllum commune) and Ear mushroom(Auricularia sp.) by using cut log then buried under ground for few months and removed the log for stacking under the shed in raining season, few weeks later either Schizophylum or Ear mushroom would start appearing, yield could be obtained continuously for years or till the logs become absolutely decomposed. But the great breakthrough in mushroom development in Thailand by using new technology started by Prof. Dr. Karn Jaranavicharn who could successfully developed straw mushroom pure culture and spawn by using lotus seed coat and horse manure in 1946 (currently(2010) he is still alive with his age over 100). Since then, straw mushroom cultivation has become one of the most lucrative and popular among Thai. Generally Thai are very fond of eating mushroom not only cultivated mushroom, but also collected wild mushrooms from the forest or field during raining season. Yet the consumption of mushroom was still beyond supply. In 1965 Thailand still imported mushrooms like Ear mushroom(Auricularia sp.), Button mushroom(Agaricus bisporus) and Shiitake(Lentinus edodes) mushroom from Taiwan, China and Europe worth more than 30 million US Dollars. The biggest constraints for Thailand could not produce enough mushroom for their consumption due to the growers relied on too expensive and limited mushroom spawn which produced by vested scientists who strictly guarded the technology themselves or among their own family. Anon Auetragul’ s family who engaged in growing Straw and Bean mushroom in the Northern had also been affected the same problem since they could not produce mushroom spawn by themselves. Till 1972, the first year as student in Kasetsart University(Agriculture), Anon Auetragul joined Mushroom Club which being formed newly by mushroom interested student under the supervisioned by Prof. Depromt Chaivongkiet. The club had dedicated in applied and modified research in making mushroom cultures, spawn and cultivation techniques. Concurrently, the practical training had also been conducted to all interested people, parties, firms since then. Surprisingly it took only 5 years Thailand could become the world largest in producing straw mushroom with the production over 60,000 ton in 1977 . 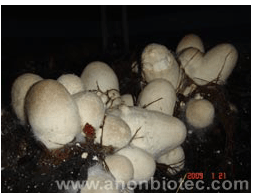 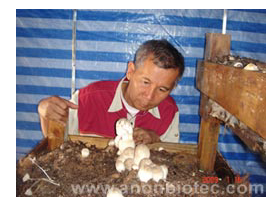 In 2009, the production of straw mushroom alone could reach over 600,000 ton. Upon the success of straw mushroom development in Thailand, Anon Auetragul have brought and developed various kind of edible mushrooms not only for functional food like Ear mushroom(Auricularia polytricha), Fan Mushroom(Schizophyllum commune), Hed Khon or Mango mushroom(Lentinus squarrosulus), Hed Lom or Thai Shiitake mushroom(Lentinus polychros) Hed Tong Fhon(Lentinus gigeateus), Rhino foot mushroom(Tricholoma crussum), Bean mushroom(Coprinus fimentarius), Oyster mushrooms(Pleurotus spp.) and Shiitake mushroom(Lentinus edodes) but also for nutriceutical(medicinal)mushrooms too like Linchi mushroom(Ganoderma lucidum), Turkey’s tail mushroom(Coriolus versicolor), Hed Piman(Phellinus linteus), Monkey head mushroom(Hericium erinaceus), White jelly mushroom(Tremella fuciformis). With his talent, endeavor and dedication to mushroom development in Thailand which benefit to thousands of growers particularly small holders by increasing their income, using waste materials from agriculture, improving people diet, sustaining country economic etc., in 1981 through the thorough checking by Prof. Dr. D.L. Umali(Philippino), former FAO Regional Director in Asia & Pacific selected Anon and sent Anon Auetragul to be FAO Mushroom Expert to Bhutan(become youngest Mushroom expert attached to FAO) between 1981-1985 , thereafter to Philippines, Nepal, Sri Lanka, Bangladesh, Lao, Myanmar, and then 1989-2003 to Western Africa like Ghana, Togo, Sierra Leone, Gambia, Liberia, Senegal and Southern Africa like Swaziland, Lesotho, South Africa. Prof. Dr. D.L.Umali had given reasons for choosing Anon Auetragul as FAO Mushroom Expert that though there are thousands of mushroom expert around the globe who have long experiences in mushroom, some could write and produce hundreds of books with sophisticated technology but very few has know how like Anon who borned in mushroom family, conducting a lot of research, practical training to thousand of growers, closely and regularly supervised to mushroom growers till Thailand become one of the world leader in mushroom producing country in a very short time. He should be counted as not only know how mushroom expert but most importantly he is practically do how mushroom expert 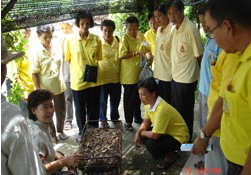 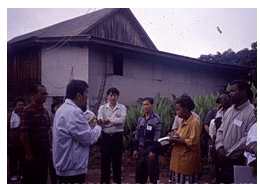 For the public benefit , solidarity and self reliance, Anon initiated and subsequently formed Amateur Mushroom Planters in 1973, Mushroom Society in 1975 and successfully forming The Mushroom Researchers and Growers of Thailand. Anon Biotech Centre was established in 1995 aiming at producing mushroom pure culture, pure spawn, mushroom additives, equipment , practical training centre as well as meeting place for member. After retirement from lengthy serving as International Mushroom Expert with United Nation, Asian Productivity Organization in Asia & Pacific, Africa and Latin America for over 25 years Prof. Dr. Anon Auetragul has currently worked actively as Technical Team leader for Anon Biotech Centre concentrating on research work in both commercial mushroom cultivation as medicinal mushroom development and production, training both for Thai and foreigner, give advice as turn-key project internationally. 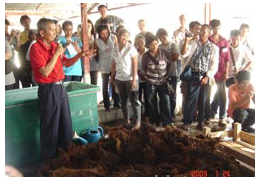 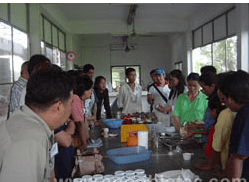 As one may know that there are readily available mushroom information all over but the appropriate technology which is simplier, workable, tangible, viable, profitable and sustainable could not be easily reached. It is therefore the Anon Biotech Centre has engaged in commercial scale in pure culture, spawn, additives, equipment, fresh and processed mushrooms, medicinal mushroom concoction, active enzymes, useful microorganisms etc. Now we are ready to share all gained experiences to those who are interested in mushroom business not only for Thai but for all around the globe.