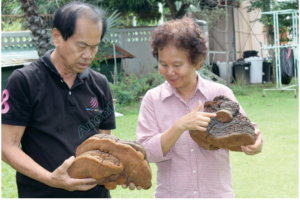 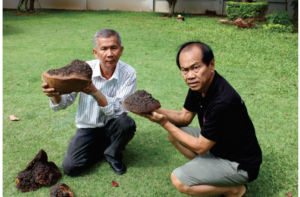 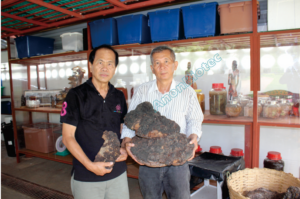 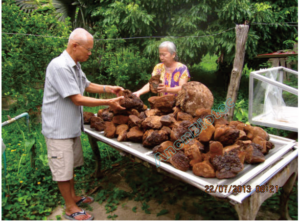 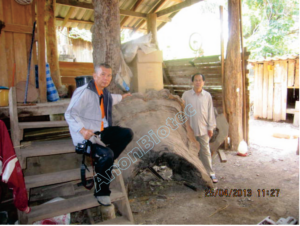 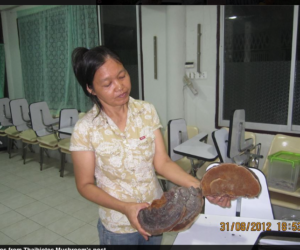 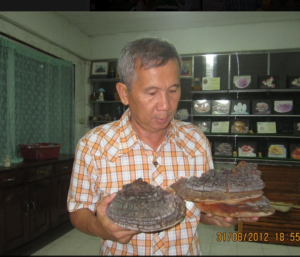 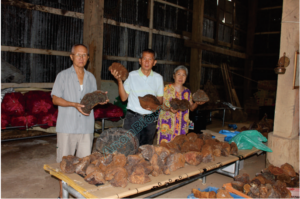 is a medicinal mushroom used in Thailand, Japan, Korea and China for centuries to prevent ailments as diverse as gastroenteric dysfunction, diarrhea, haemorrhage and cancers. It is shaped like a hoof, has a bitter taste, and in the wild grows on mulberry trees. The stem’s color ranges from dark brown to black. In Korean traditional medicine, the mushroom is consumed in the form of hot tea.
Early research has suggested that Phellinus linteus has anti-breast cancer activity.

A paper published by Harvard Medical School reported that Phellinus linteus is a promising anti-cancer agent, but that more research is required to understand the mechanisms behind its anti-cancer activity.
Nine compounds were isolated from the active ethylacetate fraction of the fruiting body and identified as protocatechuic acid, protocatechualdehyde, caffeic acid, ellagic acid, hispidin, davallialactone, hypholomine B, interfungins A and inoscavin A of which interfungins A is a potent inhibitor of protein glycation.

Extracts from fruit-bodies or mycelium of Phellinus linteus stimulate the hormonal and cell-mediated immune function; quench the inflammatory reactions caused by a variety of stimuli, and suppress tumor growth and metastasis. Recently, research has been focused on the anti-tumor effect of Phellinus linteus, and in particular, on its ability to enhance some conventional chemotherapeutic drugs. These studies suggest PL to be a promising candidate as an alternative anticancer agent or a synergizer for existing antitumor drugs.

Of all the fungi we know as medicinal mushrooms, Phellinus linteus, which has been dubbed the “King of Medicinal Mushrooms”, which grows primarily as a protuberance out of the sides of living Shorea obtuse, Shorea siamensis Miq. Acacia harmandiana (Pierre) Gagnep. trees, although they can also grow on Mulberry, in the form of what is called the fruiting body of the fungi. This portion of the fungus, which usually grows into a familiar mushroom-like shape, (or perhaps a hoof-like shape in the case of shelf mushrooms) bears spores which are released from its gills or pores into the atmosphere to seed the next generation. Such mushrooms are called fruiting bodies because their primary purpose is similar to the fruit of a tree, which is the seed bearing aspect of the organism designed to reproduce its species. There is some controversy over whether the relationship between Phellinus linteus and the trees in which it grows is a parasitic or symbiotic one. What is understood though, is that the Phellinus linteus organism feeds off the tree’s bark and wood. By doing so, vital nutrients found in these parts of the tree are transformed by and into the fungus itself, in the process rendering them into a form that is more bioavailable to us when we consume remedies made from the Phellinus linteus clinker. Phellinus linteus starts it’s growth in the heart of the tree and slowly grows outward, over time its resembles a charred knuckle protruding from the tree. Trees are the most powerful living beings in the world, some living over 10,000 years, and Phellinus linteus draws it’s nutrients directly from this life force.

Traditionally in Northern of Thailand Phellinus linteus has been used, as a tea or main ingredient for herbal concoction in the treatment of cancers including inoperable breast cancer, hip, gastric, parotid, pulmonary, stomach, skin and rectal and Hodgkins disease1, autoimmune disorders etc.

In contrast to synthetic pharmaceuticals based upon single chemicals, many phytomedicines exert their beneficial effects through the additive or synergistic action of several chemical compounds acting at single or multiple target sites associated with a physiological process. This synergistic or additive pharmacological effect can be beneficial by eliminating the problematic side effects associated with the predominance of a single xenobiotic compound in the body. In this respect, Kaufman et al. (1999)extensively documented how synergistic interactions underlie the effectiveness of a number of phytomedicines as Holistic approach. This theme of multiple chemicals acting in an additive or synergistic manner likely has its origin in the functional role of secondary products in promoting mushroom survival. For example, in the role of secondary products as defense chemicals, a mixture of chemicals having additive or synergistic effects at multiple target sites would not only ensure effectiveness against a wide range of herbivores or pathogens but would also decrease the chances of these organisms developing resistance or adaptive responses (Kaufman et al., 1999; Wink, 1999).

Holistic medicine, also known as Holistic approach is a form of medicine that addresses the whole patient; body, mind, spirit and environment. Modern western medicine has developed along the lines of reductionist science that emphasises individual organs, chemicals and diseases as though they are somehow separate from the patient suffering an illness. Treatment ignores the rest of the patient attempting to remove symptoms without ever removing causes, or even trying to identify them! In the holistic approach the patient and their illness is seen in the context of the whole individual, their life, lifestyle and environment. A vital part of the holistic approach is that many forms of treatment may be required to treat an individual’s ailments, not just one purified pharmaceutical compound. This is why in the use of herbal remedies, the whole herb is used in treatment rather than isolated constituents of the herbs. In the case of medicinal mushrooms it is interesting that modern pharmacy tries to purify and isolate the powerful active components but nature has provided a balanced remedy with several synergistic components that act together to produce the desired result; a whole remedy for a whole person. Why use an isolated chemical, when you can have the whole chemical factory?

Phellinus linteus mushroom collection by Dr. Anon Auetragul’s family might be one of the world record on the size of mushroom and quantity

Prof.Dr.Anon was born in 1953 at the small village, Phrae Province, Northen of Thailand in the mushroom growing family(Volvariella volvacea and Coprinus fimetarius). When Sanga(the elderly brother in the family) who had been serving as Forest Ranger under Forest Department, Ministry of Agricultures and Cooperatives between 1965-2003. At the early period in his career, the felling tree concession from the government being given to many private firms or companies, various different kind of big and old trees from the forest in the North and North East were cut, only the trunk had been used for log, branches including wild orchids, ferns and mushrooms being neglected or set into fire or allowed to be rotted. Sanga did observe the villagers who live on the forest by products collecting conk mushrooms with different appearances for illness treatment and of course some for firewood or home decoration. Since then Sanga had started collecting some conk mushroom like Ganoderma spp, Phellinus spp. Fomitopsis spp. Tremates spp. etc for his own collection. Sanga was acquainted with and worked along with local herbalists, villagers, hill tribe people in the North, North East including Burmese who live near the border who fully aware of wild medicinal herbs and mushrooms. His penchant for collecting these mushrooms in particular of Phellinus spp. was well known through out the regions. When Sanga retired from his official career in 2000, he had amassed a collection  with thousands of Phellinus mushroom, mostly could be Phellinus linteus in which some pieces are as big as 160 cm. in diameter with weight more than 200 kg. In 1972, his sister Sangchan and her husband(Tawat) inherited the collection  and added another thousands to the already vast collection. In 2000. The AnonBiotech Institute was established by Dr. Anon (youngest brother in the family) to house and promote medicinal mushroom collection. It was very success and seen by hundreds of the trainees, and visitors from all walks of life.