Mushroom benefit to all walks of life in Thailand Mushroom cultivation in Thailand could help reduce vulnerability to poverty, malnutrition, unemployment problem by strengthening economic livelihoods through the generation of fast yielding and nutritious source of food and reliable source of income. Since mushroom does not require big space of land, empty house, temporary clean shed, garage, etc could be used. It also does not need rain, sun for its growth, it is a viable and attractive activity for both rural farmers and peri-urban dwellers. Small scale mushroom farmer does not require any significant big capital investment but lucrative and fast return. Mushroom substrates could be prepared from any agricultural waste materials like straw from rice, maize sorghum, banana leaves, sugarcane leaves and bagasse, water hyacinth, grasses, cotton waste, sawdust etc. Mushroom cultivation could be done on a part time basis and require little maintenance. Indirectly, mushroom cultivation also provides opportunities for improving the sustainability of small farming systems through the recycling of organic matter, which can be used as a growing substrate, and then returned to the land as fertilizer or compost. Through the provision of income and improved nutrition, successful cultivation and trade in mushrooms can strengthen livelihood assets, which can not only reduce vulnerability to shocks, but enhance and individual’s and a community’s capacity to act upon other economic opportunity. 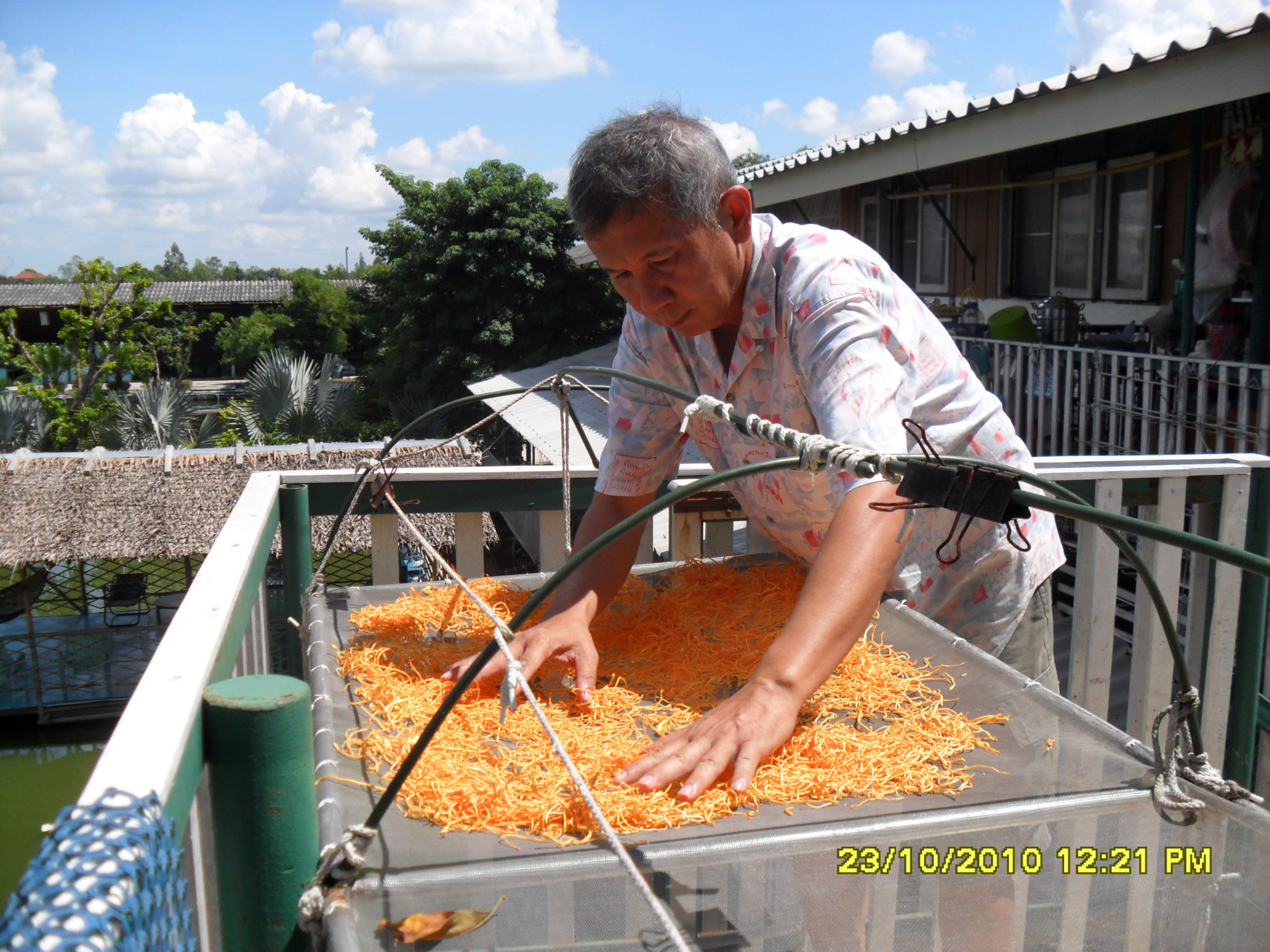 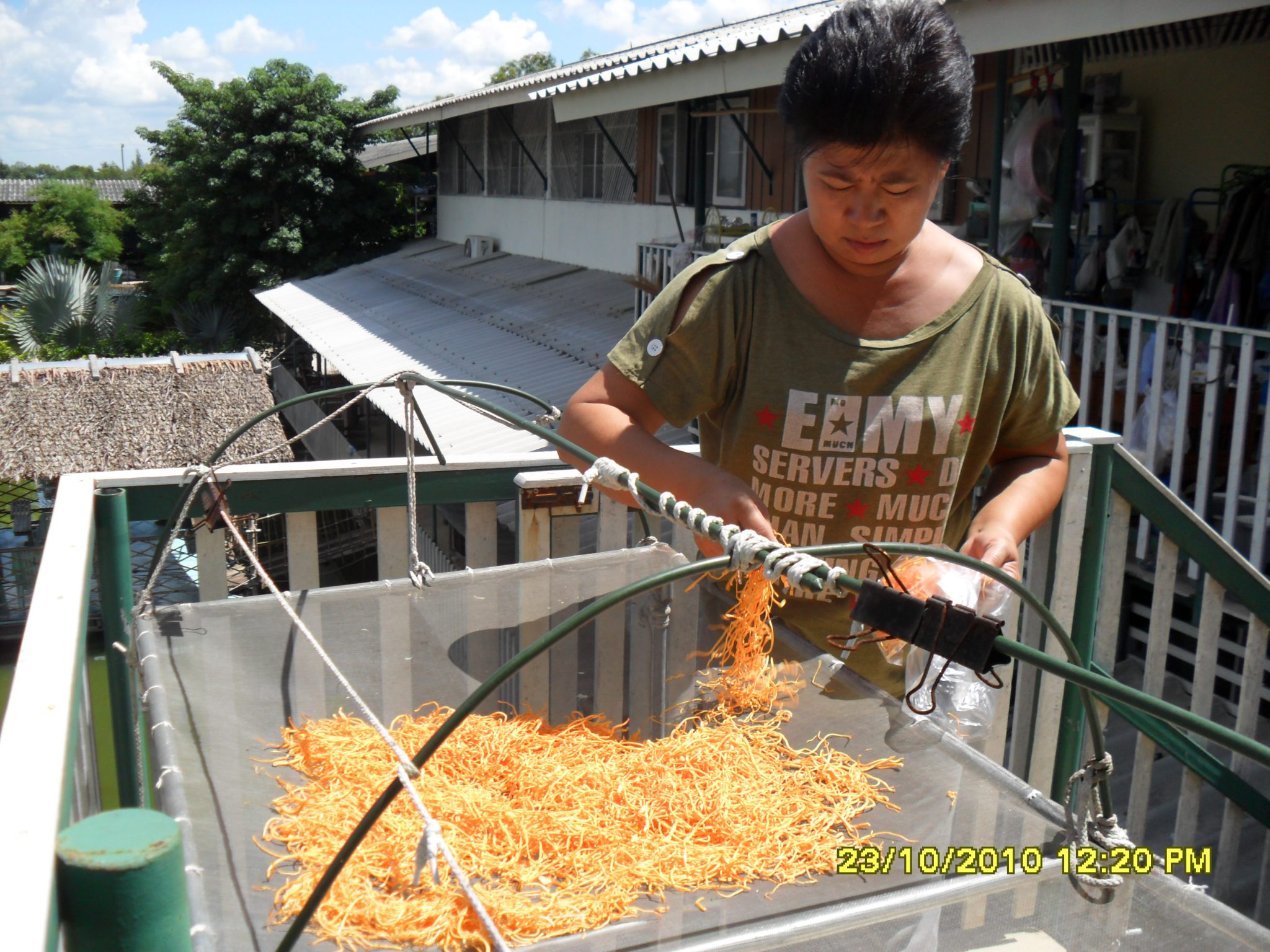 Contribution to public health
Mushrooms serve as a delicious foodstuff and also a source of food flavoring substances to staple food which is nutritious food that forms the basis of a traditional diet, particularly that of the poor in Thailand. Mushrooms are often considered to provide a fair substitute for meat(chicken, pork and beef), with at least a comparable nutritional value to many vegetables. The consumption of mushroom can make a valuable addition to the often unbalanced diets like malnutrition due to lack of protein. In 1972, Thais particularly the child age below 7 years facing severe malnutrition about 47.7 % but after improving in educational country-wide, more concern about healthy food like mushrooms, fish, meat and vegetables, affordable price and viability of food items, currently, Thailand does not have such malnutrition problem. Fresh mushrooms have a high water content, around 90 percent, so drying them is an effective way to both prolong their shelf-life and preserve their flavor and nutrients. They are a good source of vitamin B, C and D, including niacin, riboflavin, thiamine, and folate, and various minerals including potassium, phosphorus, calcium, magnesium, iron, copper, and selenium(an excellent antioxidant. They provide high fiber but low in carbohydrate and fat and contain no starch and low in sodium. Furthermore, edible mushrooms are an excellent source of high quality protein (reportedly between 19 -45 percent), like straw mushroom contains more protein than soya beans. In addition to all the essential amino acids, some mushrooms like shiitake, straw, Brazil Agaricus mushroom have medicinal benefits of certain polysaccharides, which are known to boost the immune system.
Benefits from medicinal mushroom

Recently, there has been a spectacular growth in, and commercial activity associated with, dietary supplements, functional foods and other products that are more than just food. Medicinal mushroom have routinely been used in traditional Chinese and Far Eastern people. Today, an estimated 10 percent of edible mushrooms are known to have medicinal properties and can be found in health tonics, tinctures(An alcoholic extract), teas, soups and herbal formulas. Shiitake mushroom (Lentinus edodes), straw mushroom(Volvariella volvacea), Fan or Cockle mushroom(Schizophyllum commune Fr.), Thai shiitake mushroom(Lentinus squarrosulus and Lentinus polychros) are edible mushroom with medicinal properties widely diffused and cultivated.

The medicinal properties of mushrooms depend on several bioactive compounds and their bioactivity depends on how mushrooms are prepared and eaten. Shiitake mushroom are said to have antitumour and antiviral properties and remove serum cholesterol from the blood stream. Other species, such as Pleurotus(Oyster), Auricularia(Mu-er), Flammulina(Enokitake), Tremella(Yin-er) and Grifola(Mitake), all have vary degrees of immune system boosting, lipid-lowering, anti-tumour, anti-microbial and viral properties, blood pressure regulating, and other therapeutic effects. Mushrooms represent a vast source of yet undiscovered potent pharmaceutical products and their biochemistry would merit further investigation. Medicinal mushroom should never be confused with pharmaceuticals(real medicine) that are almost invariably a defined chemical preparation, the specification for which is listed in a pharmacopoeia. Pharmaceuticals posses medicinal properties and are mainly used therapeutically for treatment of specific medical conditions. Their production and usage is subject to close control by the regulatory agencies. Medicinal mushrooms are considered as a kind of dietary supplement. They can also be used as Traditional Medicine depending on the nature of products. However, they are not pharmaceuticals(drugs) because their active ingredients are not a single, chemically defined compound as used in conventional/orthodox/modern drug treatment. Some mushroom-derived compounds eg. Krestin (derived from Coriolus versicolor mycelium), Lentinan (derived from Lentinus edodes fruiting bodies) and Schizophyllan (derived from Schizophyllum commune culture filtrates) fall into pharmaceutical category in Japan and in other countries
Source of income benefits

Mushroom cultivation activities in Thailand have played an important role in supporting the local economy by contributing to subsistence food security, nutrition, and medicine: generating additional employment and income through local, regional and national trade: and offering opportunities for processing enterprises such as pickling, sorting and drying.

Income from mushrooms can be supplement cash flow, providing either:

• A gap-filling activity which can help spread income and generally make poverty more bearable through improved nutrition and higher income;

or • A stepping stone activity to help make people less poor, or even permanently lif them out of poverty.
Livelihood opportunities

Trade in cultivated mushrooms in Thailand have become a readily available and important source of cash income for men and women and the old, infirm and disabled alike.           The role played by women in rural mushroom production can be very significant. Certain parts of the mushroom cultivation process, such as collecting agricultural waste, preparation of mushroom substrates, filling substrates in containers, and harvesting, are ideally suited for women’s, elderly and disabled worker’s participation. Several programmes have enhanced women’s empowerment through mushroom production by giving them the opportunity to gain farming skills, financial independence and self-respect.
Contribution by Anon Biotech Centre(ABC)

Anon Biotech Centre has been actively working closely with mushroom farmers in Thailand since 1972 by Prof.Dr. Anon Auetragul who has wide experienced in commercial tropical mushroom, he has also privately owned one of the biggest mushroom farm to produce mushroom pure cultures, spawn, equipment, mushroom additives, more importantly using his farm as commercial model for practical training for those who are interested in mushroom cultivation. With full of confidence, we are now ready to welcome all of you to join us in sharing mushroom knowledge or seeking our advise.